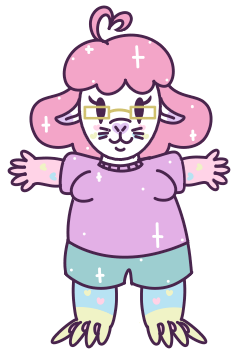 ♥ Other Interests: Computers, Marine Biology, Web Horror, Vintage Toy and Plush Collecting, Antique and Thrift Shopping, Character Design, Science, History (these can sometimes become special interests for me too as my special interests flip flop all the time) ♥

♥ Favorite Color(s): Pastels and dark purples and teals, but I like any color that's aesthetically pleasing to me. ♥

♥ Favorite Music: I have a pretty diverse musical palate, but I love rock, metal, soundtracks, ambient music (dark ambient is my fave!!), and vaporwave and its numerous subgenres. ♥

♥ Favorite Movies: Studio Ghibli films, some Disney films (of course), The Secret of NIMH, Watership Down, The Night is Short Walk On Girl, some old black and white films (purely for the aesthetic though), Yellow Submarine (the movie that sparked my special interest in animation and gave me a love for surreal imagery!!), all the Shrek films (yes I even like the third one even if it's awful), Incredibles ♥